For the latest Q4 2015 data on the London sales and lettings markets... 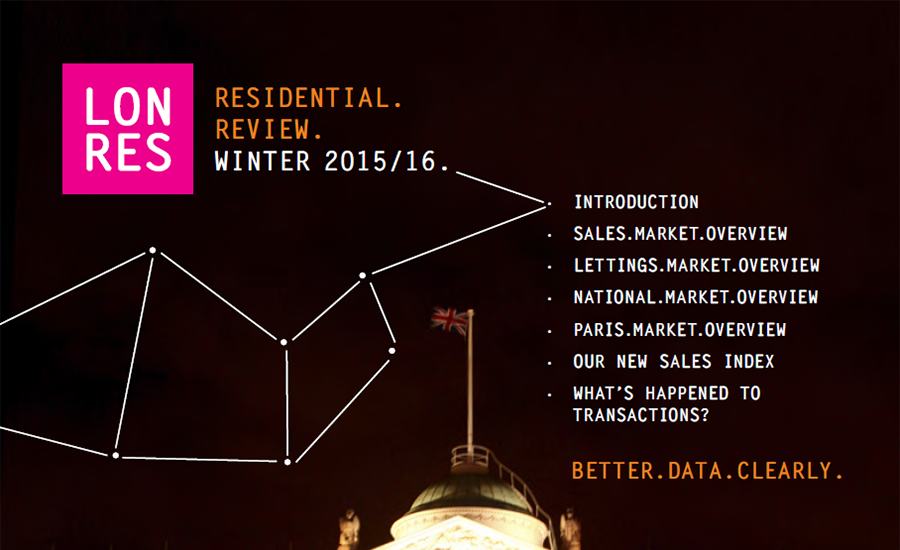 Sales. Market. Overview
Q4 2015 sales data – LonRes data shows that the prime central London (PCL) housing marketed ended the year on a subdued note.  Across PCL transactions were on average 22% down on the same time last year.  The market above £5m was hardest hit with volumes falling by over 50% (53.5%) compared to Q4 2014, while the prime fringe (the only area to see an increase) saw transactions rise by 7.7%.  The new LonRes sales index recorded a 1.3% fall in prices per sq foot in central London over the year.

Lettings. Market. Overview
Q4 2015 lettings data – the LonRes Prime London Lettings Index for central London reported a 3.1% fall in average rents over the year, while the prime and fringe areas outperformed the average rising by 2.5% and 4% respectively.  Over Q4 2015 LonRes data shows that 11% fewer properties let compared to the same period a year earlier.

The New LonRes Sales Index
Following the launch of the LonRes Prime London Lettings Index in autumn last year, LonRes, working again with housing index specialists, Acadata, has launched a new Prime London Sales Index.  The index draws upon the LonRes database of over 48,000 private residential properties sold since 2007 across the central, prime and prime fringe areas of London.

What’s Happened to Transactions?
While it would be easy to single out last year’s stamp duty land tax (SDLT) changes as the catalyst for the fall in the number of transactions taking place across the prime London housing market, the reality is sales volumes were falling even before then.  We take an analytical look at what’s been happening to housing transactions across the capital’s prime residential markets.

National. Market. Overview
Thanks to favourable mortgage market conditions, a strong economy and low levels of housing stock, house price growth across the UK accelerated towards the end of 2015.  LonRes takes a look at what the year ahead holds for the wider housing market.

Paris. Market. Overview
Property prices in Paris are now close to 2008 levels.  This has undoubtedly stimulated buying activity which has risen throughout 2015.  A trend expected to continue through 2016.  However, there’s still some way to go.  Databiens data shows sales volumes in the French capital today are back to where they were in 2010-2011 yet Paris remains a buyers’ market.