LonRes Lowdown - the market in 90 seconds

Welcome to our LonRes Lowdown for Q4 2017. If you're looking to find a quick round-up on how one of the world's most talked about residential markets performed at the end of 2017, you're in the right place. Fast, digestible and reliable analysis and inside is a click away. 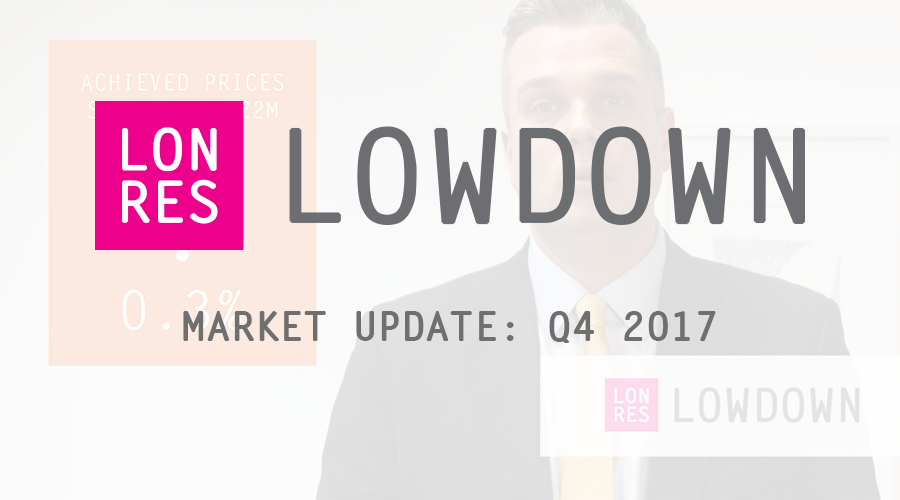 So much has happened to the London market in the past couple of years. Make sure you are up-to-speed with the latest to make informed business decisions and identify new opportunities by watching our market round-ups. Watch our 90-second sales and lettings market Lowdowns for Q4 2017, below.

Analysis of LonRes Q4 data shows disparity in sales activity and prices, depending on where a property sat on the price spectrum. The number of sales under £2m fell 6% in 2017, whereas sales at £2million or more increased by 4% over the same period.

Continued uncertainty over the Brexit process is still expected to have the most impact on the prime housing market this year. The LonRes survey reports that 46% of agents thought Brexit uncertainty would have the most significant impact on demand, ahead of stamp duty at 30%.

Our analysis shows that a fall in new instructions in the second half of 2017 contributed to a rise in achieved rents in Q4 2017. Both prime central London and prime London saw fewer properties reach the market in the fourth quarter, down 8% and 19% respectively on Q4 2016.

Our findings show the most significant increase in achieved rents was in prime central London. The LonRes Lettings Index, which fell over the first three quarters of 2017, increased by 6.3% in the fourth quarter, up 3% on the same period in 2016. Prime London recorded an annual increase of 0.8%, with falls of 2.2% in prime fringe.

Agents remained optimistic about activity within the rental market this year. 59% of agents surveyed expected an increase the number of properties let in 2018, with just 9% predicting fewer lets.

And they were cautiously optimistic about prospects for rental growth over the next 12 months too. 61% of respondents expect rents to end the year the same or higher than in Q4 2017. Let’s wait and see how the year pans out.