Is the West End's residential market taking centre stage? We talk to Laurence Glynne, Partner at LDG on buyer-types, Centre Point and Crossrail - all revolutionising sales and lettings in this vibrant area. 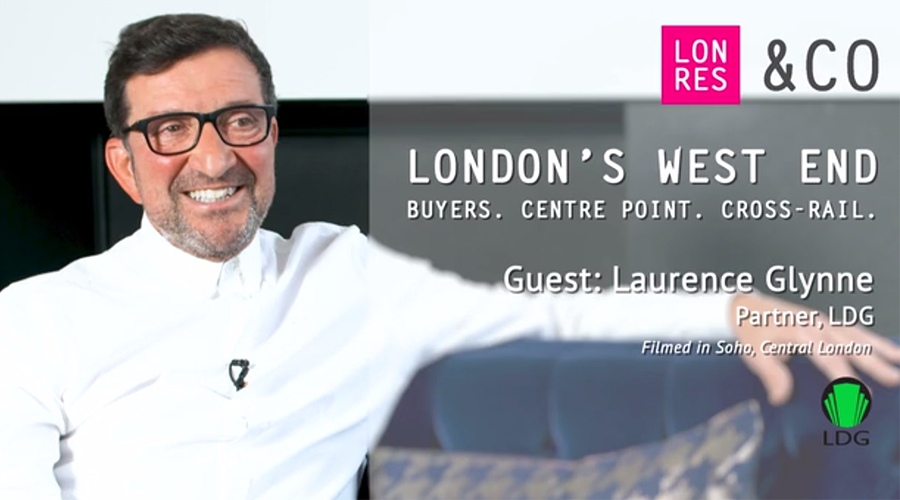 Click here for further insight and research on the performance of London's residential market.

Marcus: Welcome to our latest LonRes & Company. Investment in new transport infrastructure, alongside luxury residential developments, are changing some previously overlooked central London neighbourhoods. The more recent evolution of the prime housing market, meaning buyers have been encouraged to look outside established areas to locations they may not have previously considered. One of the most important projects currently under construction is Crossrail, with the West End looking set to be one of the main beneficiaries.

Laurence: Thanks, good to be here.

Marcus: So Laurence, what’s the story?

Laurence: I have worked in Covent Garden, Soho and Fitzrovia, and all of those areas have gone through metamorphosis. Everything is really, really taking off in the West End now. But, if I go back into 1990s it was a very different story - even the commercial market’s changed. Whereas, we used to have a very strong film and music industry in the late 80s and in the 90s, and then they moved west, but then they came back because they realised that moving out there they were losing communication. Offices now have multi-use offices where service departments are networking people together. So there’s a real strong communication.

One of the most significant things I think about the West End is that people walk around the streets in Soho and Covent Garden and they don’t imagine that there’s any residential about, in most of the areas. But, surprisingly enough there’s a huge amount of residential. You just have-to look up at all the different buildings. Great character: Georgian, Queen Anne, mansion blocks. And I think this is what gives the area the personality.

Marcus: Fantastic. And in terms of the types of buyers, have you seen that change more recently?

Laurence: Yeah, we have. You’ll see in Fitzrovia, where my office is situated, we’ve had major developments. There’s been Rathbone Square, which was done by Great Portland Estates, and then there was Fitzroy Place, which was developed from the Middlesex Hospital, where infarct I was born, funnily enough, and they have attracted buyers form the Far East, because, as we know, all quality new developments attract buyers from Asia. But, on top of that you’ve got local buyers and English people that are also investing in some of these developments, as well.

Tenants also have changed. We have a lot of students, who are renting because of the universities and everything nearby, and clients are paying very substantial money for their children to study because the colleges are probably the best in Europe-  certainly UCL, UCH and also Saint Martins. So, it is a very, very interesting development in the West End.

Marcus: It is. And obviously, with Crossrail coming as well?

Laurence: Crossrail is fascinating because when I started in the business, I was selling property in Soho and I can remember sales falling through because people were looking, they were getting the searches, and they were going “I’m not gonna buy here, it’s Crossrail. Oh, no way. I’m not having another train running underneath”. Sorry, there are quite a few lines running under most places in the West End. But it was a significant put-off point for some people.

The culmination of Crossrail for us at the West End is Centrepoint. I think Crossrail is gonna have an effect all the way along. Tottenham Court Road is going to be sensational. If you want to buy, buy around Tottenham Court Road anybody. Invest – today. Centrepoint is a fantastic development. Probably my all-time favourite development now. When I stand in there on the 23rd floor, or the 15th floor, and I look over, it’s my London. It is amazing and that is going to have a serious effect. There’s going to be a 30 metre indoor swimming pool- the largest one in London. The development is extraordinary. But also, it epitomises what the West End is about, so it’s very exciting times.

Marcus: Thanks so much Laurence.